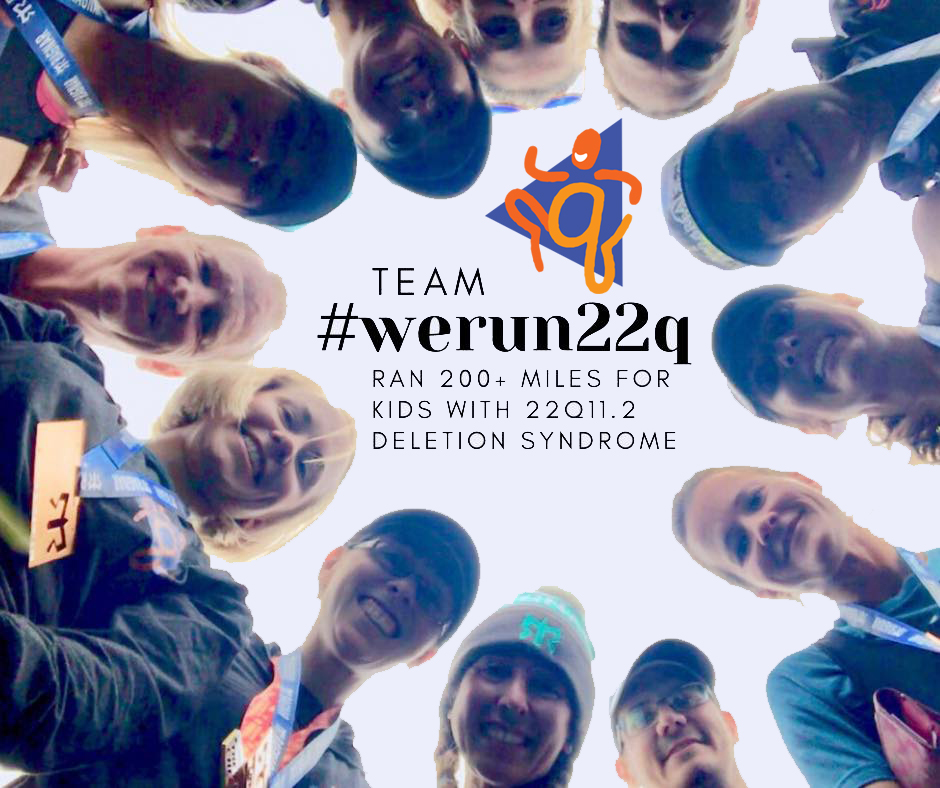 On May 17th and 18th, the #werun22q running team took off on a 204ish mile journey from Waukegan, IL to Madison, WI. They ran for over 100 children and young adults with 22q!

The team arrived to Waukegan one by one on Thursday, traveling by planes, trains, and automobiles! We headed up to Racine, WI to check in to the race and get all of the gear we’d need to complete it!

Everyone came down from their hotel rooms at 5:30am for a team photo and the van 1 send-off

Van 1 left the hotel while van 2 runners and drivers went back upstairs to catch a little more sleep – it’s a long 36 hours of racing with little down time. The official start line was at the Waukegan SportsPark – a beautiful facility! The announcer/DJ was getting everyone pumped about the race and we were ready to start!

The race continued on like that – van 1 took back over while van 2 got some food and rest. The weather turned even colder and halfway through the evening legs, the rain started. Jamie PR’d (set a personal record) in her one-mile and 5k times! Amanda ran her first night time miles. By the time Katie finished the second set of legs for van 1, the weather was so nasty that a lightning hold was called. This meant that van 2 got some extra time to rest until we could run again – 3 hours actually! Ragnar’s rules state that during a lightning hold, the team skips ahead one leg for every hour of hold time – we were told to jump from exchange 18 to 21!

Luckily, our runners are amazing and they made sure to double up on legs so that every mile that was dedicated to someone in our 22q community was completed! Sean and Ashley teamed up, Jen and Eric ran together, and the 22q aunts Kristen and Angela finished out the van’s nighttime legs!

Day 2 began and van 2 handed the slap bracelet back to van 1 to begin the last legs! Kate got a speeding ticket from the New Berlin Police Department for going too fast on a VERY HARD leg!

Katie set off on the Ragnar leg – the longest (or hardest, but not in this case) leg of the race get it’s own special medal and welcome! In Ragnar Great Midwest, this amounted to a 10.4 mile run! About halfway through, we found out we were on another lightning hold, but since Katie was already out there, we let her keep going on the trail.

Van 2 had to wait about 8 minutes after Katie came in for the lightning hold to finish so Angela could continue – we had the option of skipping ahead, but we came here to run 204ish miles and that’s what we were going to do! Van 1 went to get breakfast at the Wisconsin famous Pinecone Restaurant while van 2 brought it home! We were super lucky to have had some special visitors on the course – Evy on Friday and Caleb on Saturday – and Caleb’s family joined us at the finish line party, too!

Speaking of… THE FINISH LINE! We got the text from Ashley that she had ONE MILE TO GO and we all assembled – van 1, van 2, and our special honorees on hand, Chase and Caleb – and got ready to run under the Ragnar arch as a team! We did it for them – every one of the infants, children, teenagers, adults, and angels with 22q11.2 deletion syndrome – and we were honored to get to carry some of their names with us throughout the race!

We’d like to give a special thank you to Eileen Weum and John Serban – van drivers extraordinaire, Lynne Stieger for her exceptional navigation skills, and to Sparkle Athletic, Northern Litho and nuun for helping outfit our team and ensure proper hydration throughout our 30 hour run! We couldn’t have been successful without all of you!